With the Bakery established, Wilhelm was able to return to Germany to gather and move his wife Amalia and two children Frank and Wilhelmina to Columbus.  Back in Ohio the couple welcomed their third child William as Wilhelm and his uncle improved sales at the bakery. By 1920 Uncle Frank had had enough baking and leased his interest to his nephew Wilhelm. In 1938 Wilhelm purchased the Bakery outright from his Aunt after Uncle Frank’s untimely death. Also that year at age 24, Wilhelm’s son Frank started working in the bakery finding he had a special talent baking and decorating cakes of all description. Shorty after World War II Wilhelm retired leaving sons Frank and William to carry on as the third generation of Resch bakers. Together they toiled along supplying Columbus the famed donuts, cakes, breads, and cookies we still enjoy today.  By the 1950s William sold his share to Frank who by the 1960s built our present building at 4061 E. Livingston Ave.
In the 1970s after forty plus years at the bakery Frank proudly retired, as his father before, knowing his baked goods were enjoyed and loved by the community. Son Frank who had worked for years in the bakery after his tour as a pilot in the Air Force was ready to take the helm as the fourth generation of Resch Bakers. Frank’s brother Stephen also worked in the bakery for years and Frank’s son Frank Jr. by age 12 became the fifth generation of Resch bakers. In fact all of Frank’s three children Frank Jr., Thomas, and Lisa, with their mother Geraldine have worked at the bakery like many past family members.  For some time in the 1980s Frankie ran the new larger store at 4061 while Frank Jr. operated the old bakery down the road until it was finally closed.
In 2010 just as our family was excited about our upcoming 2012 One Hundred Year Anniversary we were saddened at the loss of our brother Thomas and father Frank Resch. At Dad’s passing we know he is most proud that his five grandchildren, Frank J., Michelle, David, Zac, and Alex are all working at the bakery as the sixth generation of Resch bakers. 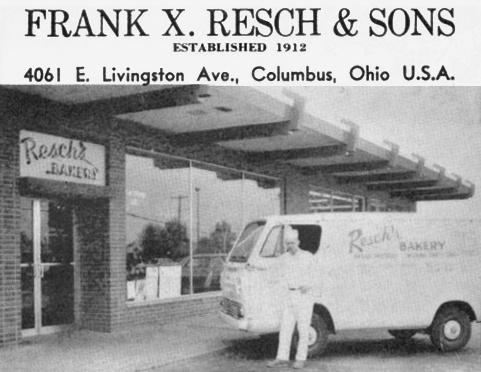